A GP with a passion for delivering after hours care to vulnerable people and a practice with innovative ideas to protects its patients from the flu have been honoured in RACGP’s annual general practice awards. 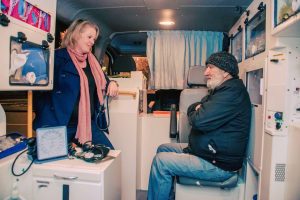 Pictured: Dr Columbine Mullins and a client of the Moreton Group’s after hours mobile clinic for vulnerable people.

Dr Columbine Mullins was named Tasmanian GP of the Year, while Port Sorell Medical Centre was unveiled as the recipient of the Tasmanian General Practice of the Year award.
Practice manager Michelle Crawford, who nominated the practice for the state award, says she wanted to acknowledge the team’s willingness to accept change through innovation, and their commitment to excellence in general practice.

This included their “fluvax initiative” which involved running evening clinics for existing patients up to 65 years old to administer free flu vaccinations, and completing preventive health screens during this consultation.

“The impact of last year’s flu season on staff and the community was very significant,” Michelle says.

Notably, she says the team will use statistical information collected during this community health initiative to determine the overall effectiveness of the flu vaccination on the community compared to last year, and the identification of preventative health screens.

She says practice principals Dr Angela Peduru Arachchige, Dr John Lenton and Dr Katerina Papas were extremely humbled and proud to learn the team was the winner of the 2018 accolade.

“It’s a great acknowledgment of a team effort to live our vision and values to provide our patients with excellence in service and continuity of care,” Michelle says.

Meanwhile, Columbine says the accolade came as a complete surprise.

“It’s not expected at all,” she says. “I have no idea who nominated me, but that’s certainly something I’m going to try to investigate!”

She says the award makes her feel more committed than ever to her work as medical director of the Moreton Group Medical Services after hours initiative.

The service, funded by Primary Health Tasmania, was established in November 2016 and provides after-hours access to a GP from 6pm to 10pm Monday to Friday in the Greater Hobart area.

A purposely fitted out vehicle has been set up as a mobile clinic, providing a safe and secure environment for both the GP and the patient.

The service is currently on the lookout for more GPs, as well as RACGP registrars, to join their team.

“It’s also just nice to get out of the office and have to think a bit more laterally.”

“At the end of the day, I’m finding it’s not really the equipment you have but your knowledge and the rapport you have with people.”