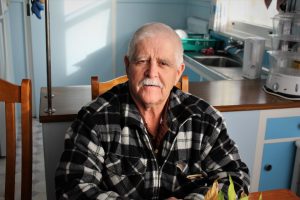 Pictured: New Norfolk man Maurie Woods says his life has changed completely since taking control of his diabetes with the help of a Diabetes Tasmania educator.

Grandfather of nine Maurie Woods remembers the day his GP of more than 20 years looked him over and said: “We’ve got to get you tested.”

The 64-year-old had already noticed some symptoms of type 2 diabetes but “didn’t want to believe” he had the chronic condition.

When the diagnosis came back, his spirits sank.

“You get down in the doldrums when you find out you’ve got it,” he explains.

“You think, why have I got it? Why hasn’t that person over there that’s 20 stone got it?”

Things got tougher when Maurie needed to have heart surgery for a leaky valve mid-2017. He spent three days in ICU at a Melbourne hospital as a result of a diabetes-induced infection.

The New Norfolk local says his health issues – and his attitude to them – were causing stress at home in the lead up to the operation, and taking a toll on his beloved wife Vickie.

“I was having arguments and that with my wife, which I never ever do. She was trying to put me on the straight and narrow, but I didn’t want it,” he says.

“‘Why should I change? I haven’t changed all my life, I’ll be right.’ That was my attitude at the start.”

The turnaround came when the Maurie sat down with diabetes nurse educator Ree Van Galen after being referred to Diabetes Tasmania’s rural primary health program, which is funded by Primary Health Tasmania.

Initially, he says he was expecting a lecture about all the things he wouldn’t be able to do anymore, and all the “dull stuff” he’d have to eat.

Instead, he says Ree’s first concern was finding out “where I wanted to go”.

While he confesses his eating habits weren’t great before his diabetes diagnosis – sometimes a whole packet of chips would go in front of the telly – Maurie got a lot out of a DESMOND group education session.

The day-long sessions are designed to support people living with type 2 diabetes and cover topics such as how to decrease anxiety and stress and boosting physical activity levels.

Now, the Franklin-born disability support worker says he eats a lot of apples, but allows himself a “cheat” every now and then in healthy moderation.

Since taking control of his condition, he’s also started working out at a local gym with trainer Stacey Dolliver as part of a nine-week program called Men’s Moves that specifically targets men living with chronic conditions.

The Freedom Health and Wellness exercise program is a partnership between Corumbene Care’s rural primary health program, which is also funded by Primary Health Tasmania.

Before he accessed these services, and after his heart surgery, Maurie says he was on 42 units of insulin. Now, it’s down to four.

Importantly, he says the financial strain of his operation is still a burden, so being able to access diabetes support and exercise classes for little or no cost has been a huge help.

“You’ve got to use the whole circle, and everybody in it.”