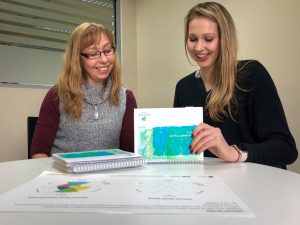 For years, stress was simply a way of life for Stephanie*.

The Launceston local’s days – and most of her nights – were filled with the demands of caring, and it was starting to take a toll on her mind and body.

“I was basically just on that hamster wheel of no sleep and lots of stress,” she says.

Things came to a head after the 50-year-old was diagnosed with breast cancer, and spent some time in a recovery facility.

During this period, she was referred to a Wellways carers course and, when that was done, encouraged to take up another Wellways-delivered program by with an emphasis on self care.

It’s called the Optimal Health Program – a self-management course that aims to improve individual wellbeing and build on people’s strengths and values.

Participants reflect on their own wellbeing, learn to recognise early warning signs of stress and develop strategies to help them self-manage their mental health.

Comprised of eight weekly sessions, the program is conducted in groups of six to 10 people and available to adults 18 years and over.

Stephanie says the program was, at times, “quite confronting”.

She remembers doing an exercise where participants were required to colour in a Health Wheel diagram to assess their satisfaction with various aspects of their lives. Each wedge of the wheel corresponded to a different area: physical, emotional, social, spiritual/values, occupational and intellectual.

Stephanie says undertaking the task forced her to acknowledge the ways in which her day-to-day life was lacking.

“Finding a better balance – that’s quite central to the program,” she explains.

It’s something she’s working towards by focusing on achievable self-care behaviours, such as making sure she gets more sleep and avoiding destructive habits like stress eating.

Importantly, she credits the program facilitator’s lived experience as critical to getting the message across.

“It’s relatable,” she says. “Sharing that information and knowledge, it put on a lot of light bulbs for a lot of people.”

For the Salvation Army Employment Plus job coach Alayna Whiteside, Wellways to Health provided an opportunity to offer additional support and skill-building to her two weekly groups based in Burnie.

“I thought that my two groups would benefit from it in terms of putting some healthy practices into their own lives,” she says.

“Anxiety and depression is a big theme among our candidates.”

She says it was entirely up to the individual if they wanted to pick up the eight-week program when they came along to their regular group meeting.

Notably, Alayna says running the sessions out of the Salvation Army premises helped foster a safe and familiar environment.

“It didn’t take any more time or space than what they were already doing,” she says.

So what kind of changes did she see in her team?

For one, they started setting goals for themselves. One younger team member started studying, while others took it on themselves to seek further advice and clinical guidance from their GP.

Alayna says one man got referred to a psychologist as a result, and has since been diagnosed with Asperger syndrome – meaning he may be able to pursue employment through a disability work provider for the first time.

“It helped them realise what’s holding them back and that, sometimes, they are their own barriers,” Alayna says.

It’s all about breaking down the journey to attaining personal wellbeing into small, manageable steps.

As Alayna puts it: “There’s one thing worse than not achieving goals, and that’s not having any at all.

“They’re not just wandering aimlessly from day to day any more.”

The Wellways to Health program is supported by funding from Primary Health Tasmania (Tasmania PHN) through the Australian Government’s Primary Health Networks Program.